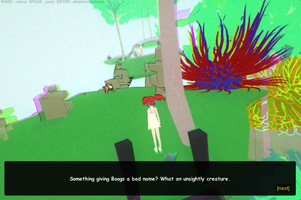 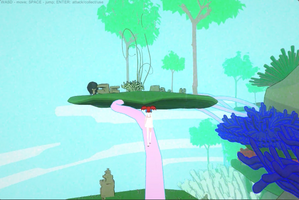 Wow. I have no idea what I'm supposed to write here and how I'll be introducing this game/update.

So, Chapter IV of re: Antistar is now released. I think it's been approximately 2 months since the previous installment and, okay. I worked on this for about a month. I was happy to find that there is less coding to do so I contributed more than usual to the visual thing. Is Antistar a team project? Not really. Is it a solo project? Definitely not... what's going on is I have people helping with the project (yes! I pay them. The money that other people save for buying houses and cars and pension funds? I give it all to Antistar).

Then I got caught in other things. Then somehow the GitHub repository disappeared (really!) and a few days later everything got back to how it should but I struggled fixing some of the many, many regressions (= backwards bugs) that crept into the previous chapters.

The battle system (so you thought it was all dialogs and collecting items?) has improved with more fun NPC A.I.s.

For the next Chapter I will revamp the camera/navigation system (again? *SOB* ), please look forward to it.

All the best - Tea

Anime journey in a fantasy multiverse